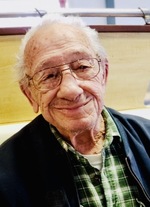 Peter J. "Pat" Carafelli, age 94 of Wooster, went home to be with the Lord, Friday, October 25, 2019 at Life Care Hospice in Wooster following a period of declining health. He was surrounded by his loving family and friends.

He was born on June 29, 1925 in Buffalo, N.Y. to Frank and Dorina (Succhio) Carafelli and has been an area resident for most of his life.

He served in the Army during WWII and married Alberta May Hendershot. She went home to be with the Lord, on March 22, 2008.

Pat had worked for many years for the Diebold Co. in Wooster before retiring in 1985.

He was a member of St. Mary Catholic Church in Wooster; previously enjoyed painting and was an avid fisherman; he also enjoyed raising his vegetable garden and a few flowers. He was especially known for his tomatoes that he was always willing to give to others.

He is survived by his 2 sons: Robert and Roger; 4 daughters: Bonnie, Judy and Penny which also includes, Jessi that was also like a daughter to him; numerous grandchildren and great-grandchildren; and many nieces and nephews and friends.

In addition to his parents, he was preceded in death by his first wife, Ruth Irene Ober; his 3 brothers and a sister.

Services will be Tuesday, 12:30 p.m. at Custer-Glenn Funeral Home in Wooster with Rev. Fr. Stephen Moran officiating followed by interment at St. Mary Cemetery in Wooster where military honors will be rendered.

All rights reserved. This obituary is also archived at obittree.com