In Memory of
Miles L.
Priest
1928 - 2018
Click above to light a memorial candle.
Memorial Candle Tribute From
Custer-Glenn Funeral Home and Cremation Services, Inc
"We are honored to provide this Book of Memories to the family."
View full message >>>
Send Flowers
Menu

In the event that there is an error
in the information presented,
please contact the funeral
home by clicking here. 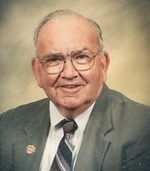 Miles L. Priest, of New Pittsburg, went home to be with the Lord, 2 days before his birthday on Saturday, May 12th, 2018 in Akron where he was surrounded by his loving family.

Miles Leroy Priest was born at home on the family farm in Chester Township to Dale and Daisy Priest on May 14, 1928. He graduated from Chester High School where he lettered in baseball and basketball. After graduation he and ten of his classmates, along with coach Roy Bates, left on a 6500 mile trip to the west coast and back. The trip was paid for by four years of picking potatoes on a nearby farm. They traveled in a 1939 Ford, owned by Miles, and a 1937 Chevy. The class visited many famous western parks, where they slept in cabins. At night they sat around the campfire with park rangers. They were surprised when the actors that were filming the movie “Ram Rod” showed up at their campfire.

In 1950, Miles married Pauline Arnold, a Chester High School graduate. Years later, along with their children, they camped across the country many times to visit family. Pauline passed away on their 41st wedding anniversary in 1991. In 1953, he went to work for the Ohio Central Telephone Company as a lineman. After thirty-two years, he retired from the phone company. In 1990, he was elected as a Chester Township trustee, from which he would retire after serving four terms. Miles remarried in 1994 to Orpha Yutzy. The two spent their honeymoon on a week-long cruise in the Bahamas. Over the years they spent much of their time going on bus tours around the country. A special trip was a 2002 train trip to visit family in California.

Over the years Miles wore many hats. He was a Red Cross volunteer for over fifty years. There he taught numerous people CPR and First Aid. He also oversaw the First Aid station at the Wayne County Fair for twenty years. The station started there as a tent at the west side of the grandstand with a telephone operator and switchboard to make calls for fair goers. The other half of the tent had a cot for First Aid. Miles also had memories of serving during the 1969 flood, when he helped free cows trapped in barns in three feet of water and aided in recovering fatalities.

In addition to his parents and first wife, he is preceded in death by a daughter, Penny Rieck.

Visitation for family and friends will be this evening (Tuesday) from 6 - 8 p.m. at Wooster Church of The Nazarene, in Wooster.

Services will be Wednesday, 11:00 a.m. at the church with interment to follow at Sherwood Memorial Gardens in Wooster.

Custer-Glenn Funeral Home in Wooster is honored with serving the family.

To send flowers to the family or plant a tree in memory of Miles L. Priest, please visit our Heartfelt Sympathies Store.

Admin|Obittree|Privacy Policy|Terms of Use|Sitemap|Powered by FrontRunner Professional & TA
Share by: